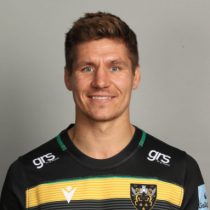 Born in Gravesend, England, Piers spent three years in the development academy of English Premiership side Saracens, before moving to New Zealand aged 18 to fulfil his ambitions of playing top-flight rugby.
After a short stint in Edinburgh, Francis returned to New Zealand and impressed for Tana Umaga’s Counties Manukau – so much so that he was drafted into the Blues’ Super Rugby squad for 2016 and soon became a key member of the squad.

After a season with the Auckland Marists he progressed into the provincial Auckland Academy where he was named young player of the year in an unbeaten season for the provincial under-20 side.

He then made seven ITM Cup appearances for the Auckland province in 2011 before signing for the 2012 Super Rugby winners at the turn of the year.

After a short stint in Edinburgh, Francis returned to New Zealand and impressed for Tana Umaga’s Counties Manukau – so much so that he was drafted into the Blues’ Super Rugby squad for 2016 and soon became a key member of the squad.

Francis has reaffirmed his desire to wear the No.10 jersey in his second season with the Blues in 2017 having already played 11 times scoring 41 points.

Francis’s play-making abilities in his 11 appearances earned him the ‘Rookie of the Year’ honours for the Super Rugby outfit, and he helped guide Counties Manukau to a first win over Auckland at Eden Park in 39 years en route to the Mitre 10 Cup semi-finals.

In March 2017, Northampton Saints confirmed to have signed the fly-half ahead of the 2017/18 season.

Francis was then called into the England squad for the 2017 tour of Argentina, making his debut from the bench in the first Test and creating one try before scoring another.

After signing for Saints in the Premiership he made his debut against Gloucester Rugby in October 2017, and was a huge asset for Northampton with his ability to play both fly-half and centre, as well as taking on kicking duties throughout the season.

He made 41 appearances for Saints in his first two seasons with the clubs scoring 137 points and was named in England's squad for the Rugby World Cup in Japan.

He made just one appearance during the World Cup as England reached the final. He ended the competition with 9 test caps and 1 try.