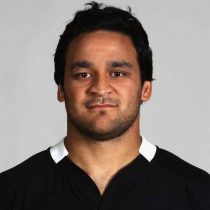 Weepu first won national honours against Wales in 2004. In 2005 was called back into the All Blacks squad for the first Tri Nations test against South Africa, having missed selection for the 2005 British and Irish Lions tour. Weepu was not selected for the 2007 Rugby World Cup squad, announced on 22 July 2007, with Canterbury halfback Andrew Ellis preferred. During the 2011 Rugby World Cup Weepu played out of position in the last pool match against Canada, coming off the bench during the second half for Mils Muliaina to play fullback. Much pressure was on the All Blacks to win the Cup, after not having won it since 1987. In the All Blacks vs Argentina quarter final match, Weepu took on Carter's goal kicking duties. Landing seven penalties with only a missed conversion, along with his outstanding general performance in play, Weepu was named Man of the Match, helping guide New Zealand to victory. After 10 years in Super Rugby, Weepu has secured a move to Aviva Premiership side London Welsh for the 2014/15 season. Soon after joining the London Welsh he joined Wasps for a short stint and then moved to Oyonnax in the Top 14. In early 2016 it was announced that Oyonnax had terminated his contract.