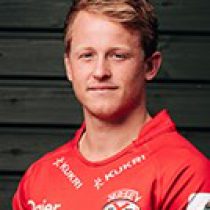 Dudley joined the Jersey Reds in summer 2012 and made his first appearance in a pre-season match against Leicester Tigers.

His first season with the Island side was badly affected by his DVT, although he returned at the end of the campaign. During his six years as a Jersey Reds' player he made 97 competitive appearances, including playing in the 2016/17 B&I Cup Final, and winning four Siam Cup 'caps'. Of Dudley's five tries in Jersey colours, the most recent stands out, when he started and finished a flowing move against Rotherham that was subsequently voted to be the Championship's try of the season.

In August 2018, Dudley was forced to retire from rugby after the diagnosis of a pulmonary embolism - a blood clot in his lung.