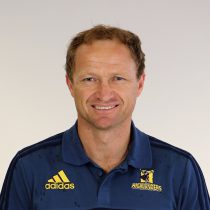 Known for his rugby brain and excellent attacking ability Tony Brown carved out a career as well respected first five. Brown made his debut for Otago in the 1995 NPC, initially as a reserve with All Black-Manu Samoa international Stephen Bachop the first choice first five-eighth.

He quickly progressed to become the first choice first five-eighth, starting ahead of the legendary Bachop in 1995 NPC final. With the launch of the Super 12 in 1996, Brown was rewarded with a place in the first-ever Highlanders squad. Bachop was also selected in the Highlanders for 1996 it meant more time on the reserves for Brown.

Brown went on to play 71 matches for Otago and 83 for the Highlanders before taking up a contract to play for the Sanyo Wild Knights in the Japanese Top League in 2005.

Brown earned his first call up for the All Blacks in 1999 and made his debut against New Zealand A on 11 June, before making his test debut against Samoa at Albany Stadium exactly a week later. Brown played a total of 18 test matches, scoring 171 test points (mostly with the boot, although he did score five tries) between then and his final test against Australia in August 2001. His international career included matches for New Zealand at the 1999 Rugby World Cup.

During this time he also represented the Sharks (2006) and Stormers (2008) in Super Rugby. In October 2008, Brown suffered a freak injury while playing in Japan, which left him with a ruptured pancreas. He underwent successful life-saving surgery, which left his future rugby playing career in doubt. However, he recovered and returned to playing for Sanyo.

After all his stints in Japan and South Africa between 2004 and 2011 Brown returned to New Zealand in 2011 for his final Super Rugby season, before returning to Japan with Wild Knights as a player coach. Brown retired at the end of the 2011 season and started his coaching career as Otago Head Coach until 2014.

Brown became a Highlanders Assistant Coach in 2013 under Head Coach Jamie Joseph. Following Jamie Joseph's departure in 2016, Brown was selected to succeed him ahead of the 2017 Super Rugby season.

The Highlanders just missed out on the playoffs in 2017 but were able to beat the British and Irish Lions 23-22. 2017 was Brown's only season in charge of the Highlanders as he joins Jamie Joseph as Japan's assistant coach. Brown worked with Joseph in the Japan and Sunwolves set up and was confirmed as the Sunwolves head coach for the 2019 Super Rugby season.

He helped Japan reach the quarter-finals of their home World Cup in 2019 before he once again returned to the Highlanders, in an assistant coach capacity for the 2020 Super Rugby season.

Brown was linked to the All Black job with Joseph but removed himself from any role with the All Blacks as Joseph re-signed as the side's head coach.

In October 2020, Brown was named as Highlanders Head Coach on a two-year deal.