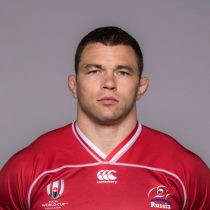 Kirill Gotovtsev has an incredibly interesting journey to test rugby. Gotovtsev was a professional freestyle wrestler and won a bronze medal in the super heavy (120kg) weight category at the 2010 Russian Championships losing in the semi-final to Bakhtiyar Akhmedov, Olympic gold medallist in the same category in Beijing 2008.

He traded sports in 2012 to become a push athlete in the Russian bobsleigh team for rather well-known Russian bobsledder Dmitry Abramovich.

Gotovtsev’s ambition was to compete at the 2014 Olympic Winter Games in Sochi but they were not selected to the national team.

In 2014 he switched to playing rugby and after spending a season with Krasny Yar reserves team. He became a member of the main Krasny Yar squad that won both the national title and the Russian Cup in 2015.