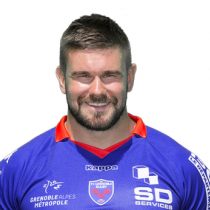 The Shannon club man moved up to the academy from the sub academy at the start of the 2011/12 season after impressing in the British and Irish Cup during the previous year.

He made his B&I Cup debut against Melrose in December 2010. Duncan made his senior debut against La Rochelle in the opening pre-season game of 2012/13 and secured a development contract for season 2013/14.

Was rewarded for his rise through the ranks with the 2015 Munster Rugby Young Player of the Year Award at the end of April.

Ruptured his pectoral muscle against Treviso at Thomond Park November 2015 and underwent surgery spending most of the 2015/16 season rehabbing.

Returned to action in an 'A' interpro against Ulster at Naas RFC in early April.

At the start of the 2017-18 season, Casey has featured 46 times for Munster scoring five tries. He will look to build on from his 6 appearances during last season.

Casey left Munster to join ProD2 side Grenoble and helped the side gain promotion to the Top 14 in his first season with the side.