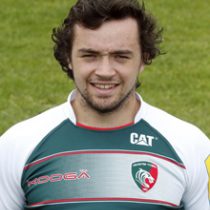 Cornish-born fly-half Bryant made his senior debut for Tigers in the 2014/15 season and ended the campaign with a call-up to the England under-20s squad for the World Junior Championship in Italy.

Coming through the ranks at the Tigers academy, Oli missed much of the 2013/14 season with injury but played in Premiership Rugby Sevens for Tigers and made his Premiership ‘A’ League debut at start of the 2014/15 season, leading the team as captain in the match against Worcester.

A senior debut followed in the LV= Cup win at London Irish, moving to centre for the following week’s home win over Sale Sharks in the same competition.

Bryant also gained senior experience at Doncaster Knights in the Championship during 2015/16, including the promotion play-off campaign, playing at fly-half and full-back.