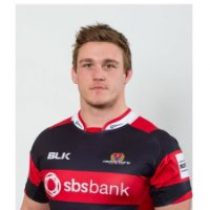 Crozier was part of the Northampton academy as a youngster in England, before playing National League One university rugby for Loughborough for three years.

During that time he transitioned from a loose forward to a hooker, but also dealt with a couple of serious shoulder injuries.

He then ended up playing for Bishop's Stortford when the idea of playing rugby in New Zealand came up. Scott Robertson confirmed Crozier' move to New Zealand.