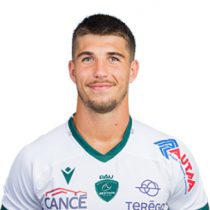 Natahn Decron is young outside centre who represents Agen at club level. Some stellar performances caught the eye of the French U20 selectors as he was selected into the France U20s squad for the 2017 U20 Six Nations.

Decron made his U20 debut against England and earned another start against Scotland the following week.

Decron was selected for the France U20 World Cup squad and helped his side to a 4th place finish in the competition.

Having helped Agen get promoted to the Top 14, Decron signed for Bordeaux Begles for the 2017/18.