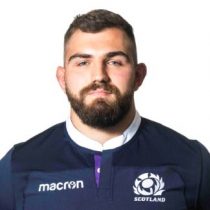 Jamie started his youth rugby with Hillfoot Minis before moving on to Stirling County where he came through the age-grades of midi and colts before playing for the senior side.

He then moved to play for Melrose and was named as part of the BT Sport Scottish Rugby Academy for ahead of the 2016/17 season.

Jamie made his Warriors debut against Canada 'A' in Stirling and his competitive debut came later that year against the Scarlets.

Having spent most of this season playing in the BT Premiership for leaders Melrose, the prop signed his first professional deal with Glasgow in February 2017. He agreed to a 12-month contract until May 2018, after coming through the BT Sport Scottish Rugby Academy.

He featured for his country in all three 2017 Autumn Internationals and five 2018 Six Nations matches, after cementing himself in the Warriors front-row, Bhatti penned a new deal at Scotstoun until at least May 2019.

Following the 2019 Six Nations, he signed with Edinburgh and joined the side ahead of the 2019/20 season.

The 15 test cap international signed a two-year deal with the club.

As of June 2020, Bhatti has made 13 appearances for Edinburgh.

In December 2020, he signed for English Premiership side Bath Rugby with immediate effect.