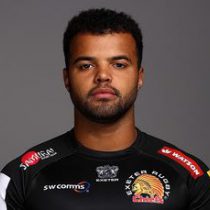 Tom grew up in London and played his rugby for Dulwich College and then Blackheath before moving to Wales to study at Cardiff University.

After making his mark in college level, he got his chance with Cardiff RFC towards the end of 2013 and turned out for them four times, scoring four tries.

Then came the move to Bridgend, where he was to become a firm favourite, touching down 18 times during 25 appearances in the 2014-15 season.

He spent last season in France, combining a university placement with a stint in the rugby academy of Montpellier, but returned to Wales for the final year of his studies, taking up joint registration with Bridgend and the Ospreys.

After debuting for the Ospreys against Harlequins in the Anglo-Welsh Cup in November, he had further outings against Cardiff Blues and Glasgow that month and also came off the bench versus Bristol on his familiar Brewery Field stamping ground. He was also part of the Ospreys squad for last season's Singha Premiership 7s competition.