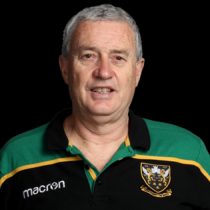 Chris Boyd is a New Zealand rugby coach who started his coaching career with club Tawa Rugby Club. He later took on the role of Wellington's 2nd XV and the assistant coach of the Wellington Lions in 2003.

In 2006 Chris joined fellow New Zealander, John Plumtree at the Durban based side, The Sharks, in Super Rugby. He left the Sharks in 2008 and joined the International Rugby Academy New Zealand as a coaching services advisor.

He was the Tongan Defence Coach during the 2011 Rugby World Cup, following the conclusion of the World Cup, Boyd rejoined Wellington as their new Head Coach and took over the role as Head Coach of the New Zealand U20.

As Hurricanes head coach he took the team to back to back Super Rugby finals in 2015 and 2016 and reached the semi-finals in 2017.

In 2018, Boyd was confirmed as the new Director of Rugby at Northampton Saints from August 2018 on a three-year deal.

Boyd arrived at Franklin’s Gardens back to mark the start of a new era for the men in Black, Green and Gold, and promptly delivered a Premiership Rugby Cup trophy in his first season, as well as berths in the semi-finals of the Premiership and quarter-finals of the European Challenge Cup.

The Kiwi coach’s second season in Northampton started with his young side marking themselves as early title contenders, playing some of the most expansive rugby in the Premiership – and while Saints’ post-lockdown form suffered a dip during the pandemic-hit league campaign, Boyd still had a Heineken Champions Cup quarter-final and qualification for Europe’s elite competition in 2020/21 to show for his efforts.

In November 2020, Boyd signed a new deal to remain at Northampton Saints at least until the end of the 2021/22 season.