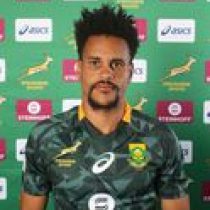 Davids was invited to train with the SA Rugby Sevens Academy following a dazzling display at the SA Rugby Interprovincial Sevens tournament in Nelspruit in 2016.

Davids represented the Griffons in the Currie Cup first division before joining the the SA Rugby Sevens Academy. He traveled to Dubai with the Academy side where he was instrumental in the team reaching the final of the International Invitational tournament.

A wicked-stepper with good pace, Davids will fulfill the role of sweeper/scrumhalf for the Blitsbok in his debut World Series in Hong Kong 2017.