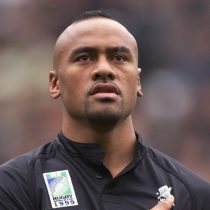 Jonah Tali Lomu was born to Tongan parents in south Auckland, which he called home for much of his life. Blessed with the speed of genuine winger and build of lock he starred at athletics and excelled at rugby at Wesley College.

Lomu played as a lock and then a loose forward at school and soon enough he was representing his country at age-group level.

Following a dominant display at the 1994 Hong Kong Sevens, All Blacks coach Laurie Mains selected him on the left wing for the mid-year series against France. Having just turned 19, he was the youngest All Black ever.

Despite his poor fitness (in part the result of an undiagnosed kidney condition), Mains persevered with Lomu. He had pace and balance, despite being 196cm tall and weighing nearly 120kg.

Lomu formed part of one of the most dangerous back threes in New Zealand Rugby history linking up with the likes of Christian Cullen, Jeff Wilson and later Tana Umaga.

Outside backs were traditionally lightly built, and Lomu had the potential to wreak havoc amongst them. He played his third test against Ireland in the 1995 Rugby World Cup in South Africa, scoring two tries and almost a third with a storming 60-m run. But it was his try in the semi-final following a botched planned move from the kick-off that went global. Lomu evaded two defenders before running over Mike Catt, the English fullback, to score one of the most iconic tries in Rugby World Cup history.

Lomu’s other shining moment came in the 2000 ‘match of the century’ against the Australian Wallabies in front of a record rugby crowd of 110,000 at Sydney’s new Olympic Stadium. The All Blacks won 39–35 thanks to a try scored by Lomu in the 80th minute after he managed to evade desperate tackles while somehow remaining in the field of play.

Jonah Lomu played his last test in 2002, aged just 27, and retired the following year, by then he needed dialysis three times a week. A kidney transplant in 2004 enabled him to play sporadically until 2010, but not to his former level.

Lomu ended his professional career with 63 test for the All Blacks scoring 37 tries. During his illustrious career, Lomu failed to score against only 3 teams Fiji (played once), South Africa (12) and Wales (3).

He represented 3 Super Rugby teams including the Hurricanes, Blues and Chiefs racking up 59 Super Rugby caps and scoring 22 tries.

As his playing career wound down, Jonah Lomu became an advocate for health charities such as Kidney Kids. He was made a Member of the New Zealand Order of Merit in 2003 and inducted into the International Rugby Hall of Fame in 2007.

People around the world were moved by his sudden death at just 40 on November 18th, 2015. One of the most inspiring players the rugby world has ever seen Lomu will go down as one of the greatest players to ever grace the rugby field.