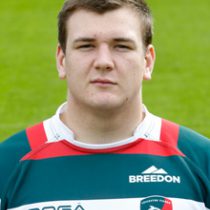 A former first-team captain at Langley School in Norfolk, Mahoney played at fly-half and centre in junior rugby before settling into the role of hooker and joined the Tigers programme as a 13-year-old.

He moved into the Tigers academy aged 17 and played in the finals of the Under-18 Academies League in 2015/16 before joining the Development squad for 2016/17, playing senior rugby during the season in National Two with Leicester Lions.