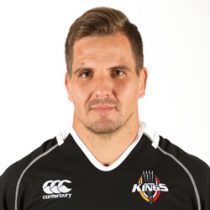 Van Schalkwyk played Vodacom Cup with the Free State team in the 2011 season after previously skippering the Golden Lions and collecting 34 appearances in the Currie Cup during his carreer, playing both for Boland Kavaliers and Blue Bulls.

He was also part of Bulls and Lions roster in Super Rugby and in 2009 he wore the Southern Kings jersey against the British and Irish Lions during their South African tour.

Moved to Italy making his PRO12 debut in round 1 of the 2012/13 season for Zebre in their first ever game at Newport Gwent Dragons. He is now their most capped player.

Made his test debut in last year's RBS 6 Nations round 1 defeat to France in Paris and gained a second cap off the bench against Scotland in round 3.

Had started six successive tests for Italy until missing out against Wales last week, scoring his maiden test try in Italy's victory over the Springboks in Florence in November.

Dries has 8 caps to his name & was recently selected in the Italy squad for the 2017 6 Nations.