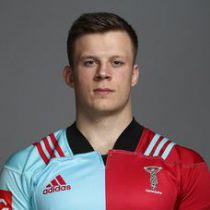 Having begun playing at Crawley RFC, Twomey joined Harlequins’ Academy set up through the Sussex developing programme. The second row has represented his country at every age grade level and made his senior Harlequins debut in 2011 against London Irish.

Having made a positive start to the 2015/16 season, Twomey sustained an injury against London Irish in December 2015. Following a successful surgery, he returned in March 2016.

As well as wearing Quins’ quarters over 50 times in all competitions, Twomey played for England Under-20 for two seasons, including an appearance in the 2011 World Rugby Under-20 Championship final.