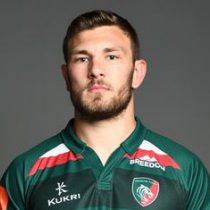 In March 2017, the second-row forward agreed to new contract terms at Leicester Tigers.