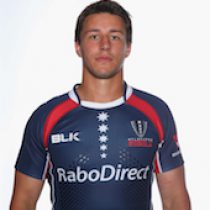 Although not decorated with representative honours, Angus is highly regarded amongst his RaboDirect Rebels peers, with many of the coaches claiming he is one of the most natural footballers they have ever seen at the Club. Having played his junior Rugby Union in country New South Wales for the Gundedah Red Devils, Angus went on to attend St Ignatius College where many tipped Angus to immediately progress through the grade system of Sydney. He had a different view, deciding to take a break from his studies to travel, whilst working as a Physical Education teacher in the UK. Having left Australia as a halfback, Angus returned as a goal kicking fullback and fly half for the northern suburbs Club Colt side, before making the switch to grade for Sydney University in 2011.