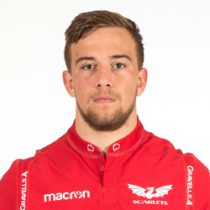 The Narberth-born flanker, who has played much of his rugby at semi-pro level for Carmarthen Quins, progressed from Scarlets' age grade sides to a Development contract in 2014-15.

His Scarlets debut came in the region’s PRO12 derby clash against Cardiff Blues in December 2014.

The dynamic flanker made 29 appearances in a Scarlets jersey before extending his contract in January 2017.

The popular Welsh back-rower left Scarlets after five years with the region, where he has made 85 appearances and captained the team on numerous occasions.

As of May 2020, he has made 18 appearances for the Cardiff Arms Park side and has scored 10 points.