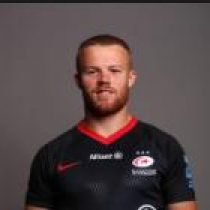 Born in south London and from a humble rugby background at Battersea Ironsides, Whiteley played rugby at the tender age of 7 for Rosslyn Park's junior sides.

He spent brief spells in Bristol and Harlequins’ Academies before being spotted by Saracens playing in the Rosslyn Park 7s.

Under the watchful eye of Richard Wigglesworth and Ben Spencer, Whiteley has grown into a leader, captaining Saracens Storm on a number of occasions, helping them to the Premiership Rugby Shield title in 2018/19.

In the same season, he scored on his first Premiership start away to Bristol Bears having featured at home in Europe for the first time earlier on in the campaign.