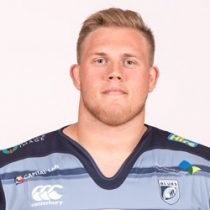 The loosehead prop made his first-team bow last season during a Cardiff Blues injury crisis just after Christmas in an away game at Pau in the European Challenge Cup. Since then he has gone on to make his first Pro14 start in a very impressive performance against Munster, making 13 appearances in all between January and May.

At just 20 years old he was already around 19 stone, and mixed a powerful scrummaging game with mobility around the field that belies his size. One of a number of promising looseheads, alongside Brad Thyer and Rhys Carre, the competition will serve them, and Cardiff Blues, well.

In October 2017, Corey signed a long-term contract with the region and he is one of several promising youngsters in the squad.

As of May 2020, he has made 14 appearances for Cardiff Blues and has scored 5 points.