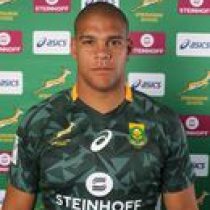 Davids was a superstar at Cape schoolboy level, and made the SA Schools team.

Former Rondebosch Boys’ High flank Davids, who hails from Grassy Park, lined up for the South African Under-20 side at the World Rugby Under-20 Championship that kicked off in Manchester in June 2016.
Davids was called into the Blitzbokke squad ahead of the HSBC 7's Series in Wellington and Sydney.