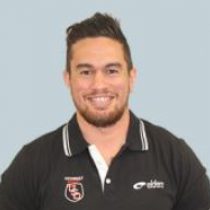 Between 2010 and 2012 he played Super Rugby for the Crusaders. He made the move north to join the Blues ahead of the 2013 Super Rugby season.

He represented Tasman Makos in the domestic ITM Cup competition. MacDonald was named in the Māori All Blacks team for the 2012 end-of-year rugby union tests.

With a high work rate around the field and accuracy at line out make him an asset to any team. After a season with the Chiefs he rejoined the Blues Super Rugby set up for the 2016 season

MacDonald ventured to France in late 2016 and played 100 games for the Oyonnax club before returning home to play again with the Mako in 2020.

He heads into the 2020 Mitre 10 Cup season having played 78 games for Tasman Makos.