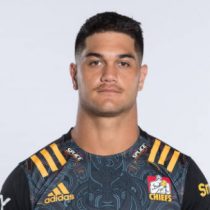 A former New Zealand secondary Schools captain, Quinn Tupaea is another blockbuster centre coming out of the land of the long white cloud.

Tupaea broke onto the scene for Waikato during the 2018 Mitre 10 Cup after he was called into the NZ U20s squad as injury cover.

He lit up New Zealand's domestic competition, scoring seven tries through his potent mix of inside stepping and outside breaks from the 13 position.

He started 10 of his 12 games for Waikato in his debut season but missed out on a Super Rugby contract for 2019 but was handed an interim training contract with the Chiefs and represented the Chiefs' u20 side.

He was named in the New Zealand u20s squad for the U20 World Championship for 2019.

Tupaea has been named for the Chiefs squad ahead of the 2020 Super Rugby season. He is uncapped and will look to make his debut.

A powerful runner and skilful with ball in hand, Tupaea is one to watch in Investec Super Rugby.