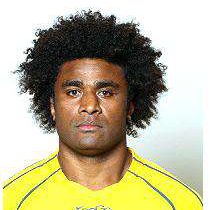 Samo's selection on the international stage came after his meteoric resurgence in 2011 was dubbed the sporting comeback of the year, with the then 35-year-old, 117kg Fijian earning selection in the Wallabies Tri Nations and World Cup squads after a powerhouse season with the premiership winning Reds. Radike made his stunning return to Test Rugby in 2011 against South Africa, an amazing 2,456 days after he last represented Australia off the bench against Scotland at Glasgow on 20 November, 2004. He was also the first player at the RWC to play for his side in both the forwards and in the backs. Reds coach Ewen McKenzie plucked Radike from semi-retirement in late 2010 as injury cover for their sidelined hard-nosed skipper James Horwill and he was later rewarded for his stellar performances with a fulltime contract in 2011. His comeback year reached new heights when Radike made an astonishing return to the Wallaby colours for the first time since 2004. Before joining the Reds, Fijian-born Radike had previously played in 35 Super Rugby games and scored four tries for the Brumbies between 2000 and 2006. He also starred in the Brumbies’ 2004 championship campaign.