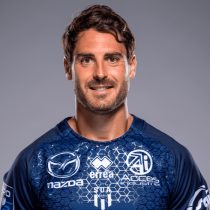 Originally from the village of Girondin Captieux, Raphael Lagarde joined Stade Langonnais who he represented at youth levels teams.

In May 2010, he joined the Montpellier and only spent one season at the club before he joined SU Agen due to a lack of playing time.

Lagarde was on the move again ahead of the 2016/17 season when he signed with Pro D2 side Bayonne.

As of the Champions Cup, Lagarde has had 14 European Cups appearances scoring 120 points.