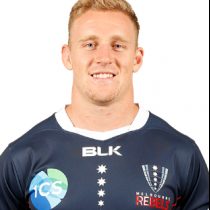 Hodge moved to Melbourne in 2015 where he played Shute Shield and NRC rugby for the Marlins and North Harbour Rays respectively. The big utility back represented Australian Schoolboys and Australia U20's until 2016 saw him included in the Rebels Super Rugby squad.

After a solid 2016 Super Rugby season, he was included in Michael Cheika's Wallaby Squad and made his debut against the All Blacks in the Rugby Championship. One of his big assets is he has a huge kick off the tee and is often used for long-range kicks.

In February 2017, Hodge re-committed to Australian Rugby and the Melbourne Rebels through until the end of 2020, becoming the first Wallaby to re-sign beyond the 2019 Rugby World Cup in Japan.

One of the most versatile players on the planet, Hodge is one of the Rebels key players and by June 2018 he had made 39 appearances in Super Rugby.

He continued to impress for the Wallabies and Rebels in multiple positions across the backline and was added to the Wallabies Rugby World Cup Squad where he made his first appearance at a World Cup.

In December 2020, Hodge penned a new deal with Rugby Australia and the Melbourne Rebels until 2023.