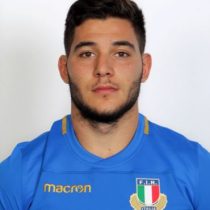 Renato represented Italy at underage level and has also lined out for Calvisano while being contracted to Zebre.

He represented Italy at the 2014 Junior World Championship in New Zealand.

The rangy backrower has established himself as a member of the senior squad for the 2017-18 season.

Renato made his debut for the Azzurri against South Africa in the 2017 November International in Padua and has been included in Italy's 2018 Six Nations squad.