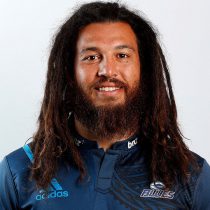 Rene Ranger is, simply put, a monster of a man. The 101kg, 6 ft centre/wing has an incredibly physical style, making him feared in both attack and defence.

After making countless impressive runs on the sevens circuit, Ranger made the leap to the 15 man game, joining the Blues in 2009.

Here he shone in his first year, leading to his first All Black call up in 2010.

He made his debut in 2010 against Wales, but after gaining two more caps he had to wait until 2013 for his next call up, for the tour of France. With his terrifying running ability, and deft offloading touch, Ranger will continue to worry defences worldwide.

Ranger joined Montpellier during the 2013/14 season on a 3 deal. He made 38 appearances for the French side scoring 7 tries.

Ranger returned to New Zealand in 2016, where he linked up with the Blues.

Ahead of the 2017 Super Rugby season Ranger has made 71 appearances for the Blues scoring 26 tries.

Ranger was only able to make 5 appearances for the Blues in Super Rugby and scored 2 tries.

Ranger made just 7 appearances for La Rochelle during the 2017/18 season before returning to New Zealand to re-join Northland for the 2018 Mitre 10 Cup season.