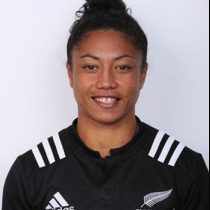 Experienced and quick-stepping winger Renee Wickliffe has shown her class and finishing ability for both the Black Ferns and Black Ferns Sevens since 2009, not to mention with Auckland and Counties Manukau (out of the Manurewa club) in that time.

Wickliffe joined a resurgent Counties Manukau in the Women’s Provincial Championship in 2013 but was previously a key part of the Auckland Storm.

She made her Black Ferns debut in 2009 against England and featured in the Black Ferns’ World Cup defence in 2010.

Wickliffe is also a Women’s Rugby World Cup Sevens winner with the Black Ferns Sevens side, for which she debuted in 2009.

The versatile back has two Women’s Rugby World Cup victories to savour, in 2010 and 2017, and follows in a long and illustrious line of potent Black Ferns finishers.

Wickliffe can also play at fullback or five-eighth. She was a New Zealand touch rep in 2010.