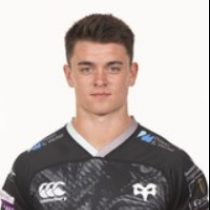 Born in Neath, Reuben attended the town’s Ysgol Gynradd Gymraeg Castellnedd before going on to Ystalyfera Comprehensive, coming up through Neath Athletic RFC.

He came through the development pathway via Neath Athletic RFC, educated at YGG Ystalyfera and Neath Port Talbot College, represented the Ospreys at age-grade, notably as part of the U18 team that won the 2015 WRU Championship.

He made his debut for Neath in October 2015 at the age of 17 and has put in a series of eye-catching displays for the club. Morgan-Williams has also shown up for the Ospreys U18s team, starring in their win over the Scarlets U18s in January 2016.

On the international scene he has been involved with Wales U20 across three separate seasons, enjoying Grand Slam success in 2016.

Elevated to the Ospreys senior team for the first time at the start of the 2017/18 season, he made his debut in the win over Zebre on the opening day of the campaign.

Ahead of the 2020/21 season he signed a 2 year contract extension having made 20 senior appearances scoring 5 tries and played in over 50 games for the Wales 7's team.