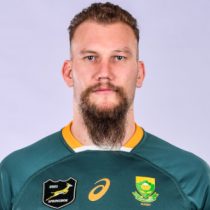 A colossal of a man, RG Snyman made massive strides towards becoming a professional rugby player having shown early promise at primary school level when he played in the 2008 Under-13 Craven Week competition.

Snyman is another in the long line of Springboks from the famed Affies, Rudolph Gerhardus Snyman went straight into the Blue Bulls Academy having represented the Province at school. He earned his dues at youth level for the Bulls and a year later he made his Super Rugby debut despite not having featured in any first-class matches up to that point.

He made his debut in the opening round of the 2015 Super Rugby season and made his senior debut in the first match of the season against the Stormers. At the age of 20, Snyman made such an impact on the Bulls that by June 2015 the franchise extended his contract at the Bulls until October 2017.

The imposing second-rower cemented his place in the Bulls' starting line up and took his Super Rugby cap tally to 25 by 2017. A new contract extension saw Snyman commit to the Bulls until at least 2019.

Snyman proved himself to be one the best second rowers in South Africa during the 2018 Super Rugby season with his performances earning him a test call-up under new head coach Rassie Erasmus.

His test debut came in Erasmus' first victory as the Springboks head coach as he started the first June Test against England at Ellis Park with the Springboks running out 42-39 victors.

Snyman become a regular in the Springbok squad from that stage and took his test cap tally to 23 as he helped the Springboks win the Rugby World Cup in Japan producing a man of the match performance against Canada in the pool stages.

The Viking looking second-rower is highly regarded for his athleticism, ball-handling skills and towering presence in the lineout.

Snyman had a stint in Japan with Honda Heat with his performances going viral including a solo try from a kickoff. In January 2020, he signed a two-year deal with Munster.