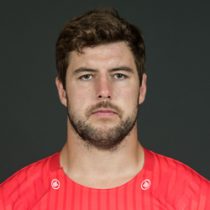 Born and bred in New Plymouth, Rhys Marshall captained the Hawke’s Bay Under 20 side that won the Central Region competition and was captain of the New Plymouth Boys First XV. Having represented Hawke’s Bay at u20 level, Marshall earned a call up to the New Zealand u20 team at the 2012 IRB Junior World Championship in South Africa.

After the competition, Marshall played for the Hawke's Bay's Colts team. In October 2012, Marshall was a surprise inclusion in the Chiefs squad for the 2013 Super Rugby season despite having not made his senior provincial debut. His deal with the Cheifs also saw him sign for Taranaki in the ITM Cup.

He started his first Super Rugby game for the Chiefs 41–27 win over the Highlanders. Later that year, Marshall was called into the Maori All Blacks squad after former All Black Hika Elliot failed a fitness test, and with Mahonri Schwalger also injured. At the time of his call up, he was still yet to make provincial rugby.

Marshall made 22 Super Rugby appearances for the Chiefs and played his part in the Super Rugby winning campaign in his debut season. He also made over 30 appearances for Taranaki. He made his debut for Munster in Cork where they defeated Ospreys in November 2016 and the following week he featured in Munster’s historic win over the Maori All Blacks at Thomond Park.

He made his Champions Cup debut against Leicester Tigers in Thomond Park in December and scored his first try for the province away to Connacht at the Sportsground later that month. Marshall finished out his first season with an impressive 24 appearances for the Province. He backed that up with another impressive season where he scored five tries in 26 appearances for the province in the 2017/18 campaign.

His 2018/19 season was cut short as he made just five appearances before suffering a hamstring injury against Gloucester in October. Despite his injury, he signed a two-year contract extension in December 2018, committing to the province until at least June 2021.