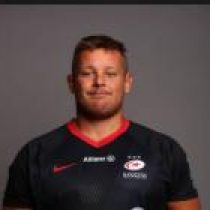 Having arrived at the club as a virtual unknown, Barrington left Championship Jersey in the summer of 2013 to join up with the Saracens.

In that time, he has carved out a reputation as a fine scrummager, with a big potential.

While sharing the loosehead duties with experienced scrummagers, Barrington increased game time following the loss of Rhys Gill to the Blues.

A former Gloucester Academy Player, Barrington started his career with Jersey RFC before a series of solid performances saw him catch the eye of the Saracens coaching staff.

As of January 2017, he had appeared in five finals, collecting two Premiership medals and an LV Cup and Champions Cup medal in the process.