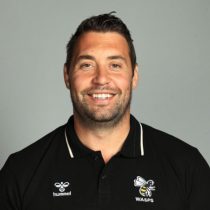 Blaze joined England Rugby as part of the coach development agreement in November 2017, working as England U20s forwards coach. Previously he worked as forwards coach at Tigers having played for the club from 2007-10.

Blaze represented England Saxons at the Churchill Cup in 2007 and 2008 but was forced into early retirement through injury.

In September 2018, he was appointed forwards and defence coach of the England Women’s team, working alongside head coach Simon Middleton and backs coach Scott Bemand.

During his spell, the Red Roses won the 2019 Women’s Six Nations Grand Slam and secured 17 wins out of 18 matches.