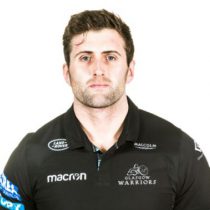 Richard John Vernon started his pro career at Border Reivers until they disbanded in 2007.

His contract was then moved to Glasgow where he would break through into the team playing mainly at No. 8 or openside flanker. He won his first cap for Scotland as a replacement in the 23 – 10 victory over Fiji in the 2009 Autumn Internationals.

He then left the Warriors in 2011 for the Sale Sharks, signing a two-year deal with hopes for more game time to develop his game and enhance his prospects for more caps with Scotland.

At the end of 2013 he returned to Glasgow, however, he struggled to tie down a regular starting place in the back row due which led to an unusual conversion in position to centre.

In March 2018, he was called into Scotland's Six Nations squad ahead of the final match of the competition. His last represented in the Rugby World Cup 2015 quarter-final match against Australia.

At the time of writing, Vernon has 24 test caps with injury keeping him from adding to that tally.

In June 2018, the Scotland International centre signed for London Scottish for the 2018/19 season.

Having featured 14 times, scoring one try for London Scottish, Vernon announced that he will retire at the end of the 2018/19 season after a remarkable thirteen-year career at the highest level.