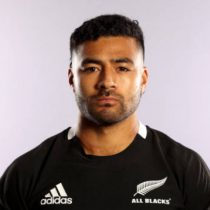 Born and raised in Christchurch, Mo'unga was initially educated at Riccarton High School in his hometown before being offered a scholarship at St. Andrew's College where he played first XV rugby for 3 years and captained them in his senior year.

Mo'unga enjoyed a rapid rise from high school to the ITM Cup via club rugby with Linwood RFC in 2013.

He wasn't named as a full member of Canterbury's squad for the 2013 ITM Cup, but was called up to cover injuries and All Black absences and went on to make 8 appearances during the campaign. He then signed a contract with the side and was named in the squad for the 2014 ITM Cup and played in 10 matches, featuring both at first five-eighth and fullback.

Mo'unga made his Super Rugby debut for the Crusaders in 2016, and after a chain of favourable performances, the rising star was re-signed with the club through to the end of the 2019 Super Rugby season, having made 16 Super Rugby appearances scoring 179 points.

Mo'unga established himself as one of the premier flyhalves in Super Rugby competition during the 2017 Super Rugby season as he guided the Crusaders to their 8th Super Rugby title. He made 13 appearances scoring 133 points and started the Crusaders match against the British and Irish Lions.

After guiding the Crusaders to the Super Rugby title in 2017 and Canterbury to second place in the round-robin stages of the Mitre 10 Cup Mo'unga earned his first call up to the All Blacks squad for their final Bledisloe Test against the Wallabies.

Following an injury which saw him sidelined for half of the 2018 Super Rugby season, he came back for an outstanding campaign which included a Man of the Match performance in the Final. His impressive season saw him named as an All Black for 2018 and he now has 17 Test caps to his name, including five appearances in the 2019 Rugby World Cup.

Mo'unga took his test cap tally to 24 by the end of 2020 and having helped the Crusaders win the 2020 Super Rugby Aotearoa competition, he was named the Super Rugby Player of the Year.