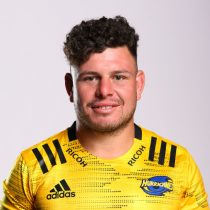 Riccitelli was born in Durban, South Africa before migrating to New Zealand at the age of four. His attendance at Francis Douglas Memorial College saw him become the school's sportsman of the year in 2012.

Brought up in Taranaki, he began his representative career at Taranaki at U14,16 and 18 levels and gained Hurricanes U16 tournament team selection in 2012.

He represented the Hawkes Bay and was called up to the New Zealand u20s team after impressing coach Craig Philpott.

Riccitelli played for the Southern club in Dunedin and also captained the Otago under-19s. He also played for the New Zealand U20's in the Oceania Junior Championship.

He joined the Hurricanes after being called up into the squad to replace an injured Dane Coles. He made his Super Rugby debut when he was announced in the squad's 23-man team to play the Brumbies in their season opener.

Strong in the set-piece and with a huge work rate around the field he is reliable and dynamic. In the absences of club captain Dane Coles, Riccitelli enjoyed more game time with the Canes and played in every match in 2017 and started in 11.

In April 2018, the hooker signed a new deal to remain with the Hurricanes until at least the end of 2021.

He took his cap tally with the Hurricanes to 71 by the end of 2021 before signing a two year contract with the Blues ahead of the 2022 season.