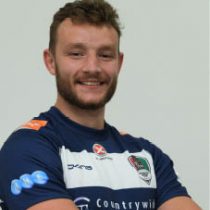 After initially taking up rugby at Coundon Court school, Knox made the short move from Barkers Butts to Coventry in 2013, and since then, went on to make 116 senior appearances and claim 59 tries.

Knox played his early rugby as an inside centre, and during his time at Cov has also been seen on the wing and in the No.13 shirt, which he has worn for much of the 2018/19 campaign.

His powerful carrying game and robust defence have proved ideally suited to the demands of the Championship and as a consequence, Knox became one of his club’s stand-out performers since their promotion.

In February 2019, he committed his long-term future to Coventry by signing a new three-year contract.