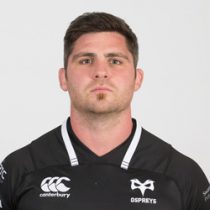 A ferocious hard running back row, McCusker made his Scarlet’s debut in 2007. McCusker’s speed and offloading ability are attributes he honed whilst representing Wales at rugby Sevens.

McCusker rose to prominence in 2010, as he scored twice in Scarlet’s Heineken Cup game against London Irish.

McCusker’s stock began to rise as his Heineken Cup try scoring exploits soon earned him a Welsh cap, as he debuted against South Africa in June 2010. McCusker was named Scarlet’s captain for the 2012-2013 season.

In August 2016, McCusker was added to the Ospreys squad on a short term contract to provide back row cover for the club's 2016/17 season, with the contract being extended a month later for the whole season after his impressive early season form.

In June 2017, Ospreys announced McCusker has signed a new two-year contract keeping him at the Liberty Stadium until 2019.