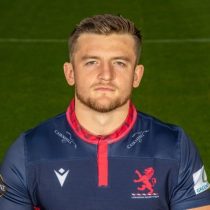 Northampton-born Stevenson learned his rugby at Sedburgh School, and while at Durham University was named in the BUCS Super Rugby team of the year and featured in the GB Students Sevens team in the World University Sevens Championships.

In 2017 he signed for London Scottish, where he had 18 starts during the 2019 season, scoring six tries, and had 40 appearances in all for the Exiles.