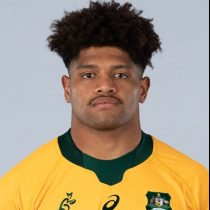 A technically sound backrower with a big bruising physique to back up his skills, Valetini is a strong ball carrier and game-changing defender who has future Wallaby written all over him. The son of Fijian parents – father Manueli Valetini and mother Finau Valetini – the Melbourne-born Robert Valetini attended Westall Secondary College and has represented Victorian state squads at U16, U18 and U20 level.

He rose through the ranks of Melbourne’s Emerging Player Program and at the age of just 17 was a key member of the Rebels U20s side for the inaugural Super U20s Championship earlier in 2016. A broken leg in his last year at school meant he missed a chance at selection for the 2016 Australian Schoolboys team but he was called up to play for the Melbourne Rising in the National Rugby Championship (NRC) later that season.

While still at school, Valetini signed an Extended Playing Squad contract with the Brumbies for the 2017 season and beyond. In doing that he became only the 7th Australian player to sign a Super Rugby contract while still in high school.

Valetini had a very successful 2017 despite injury interruption, the Victorian was selected in the Australian U20’s for the Junior World Cup in Georgia. A big year for Valetini was topped off with a two-year full-time Super Rugby contract with the Brumbies until 2019, before playing NRC for the Canberra Vikings in 2017

However, his chances of making the Wallabies Rugby World Cup squad was derailed by a knee injury but a bittersweet moment saw the highly touted prospect make his test debut on his 21st birthday against Samoa in the Wallabies final pre World Cup match.

Capable at six or eight, Valetini loves to do two things, hit people and carry the ball. The former is something he is still underrated for, but everyone knows not to look away when he gets his hands on the ball. Put simply, there may be a handful of players across the globe with Valetini’s talents.

Valetini had a bright start to the 2020 Super Rugby season featuring in all six of the Brumbies' games before the season was brought to a hault taking his Super Rugby tallies to 19 caps and three tries.