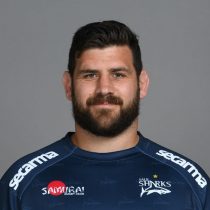 The hard running hooker became quietly impressive in the Leeds Carnegie, Wasps and Bath squads, since his rugby debut in 2003. A tremendous ball carrier, Webber has represented England at U16, U18, U19, U21 and at Sevens.

He was part of England’s 2006 U21 World Cup squad. Webber represented England at Sevens during the 2008 London Sevens. He was named in both the 2008 and 2009 Churchill Cup Saxon’s squad and made three appearances during the 2009 competition.

Webber's impressive form for Wasps, where he was vice captain, saw him called into England’s 2012 Six Nation’s squad, where he made his debut off the bench against Italy.

After over 300 professional games for club and country, Webber announced that he would retire at the end of the 2019/20 Premiership season.

In March 2020 he was named as Jersey Reds' new forwards coach.