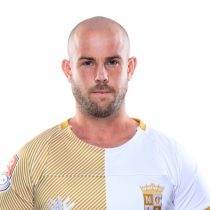 A slight player at just 1.79m and 83kg, what Coleman lacks in size he makes up for in pace off the mark and elusiveness. Over 40m Coleman is among the fastest players the Brumbies have ever had on their books providing him with ample opportunity to get over the try-line in 2013.

The 2010 Australian Under 20’s Player of the Year was a world IRB Under 20’s nominee in the same year, which he capped off with a silver medal at the Delhi Commonwealth Games in the men’s sevens team.

An accomplished fullback, Coleman has shown his versatility and been shifted around the park since making his Brumbies debut featuring at scrumhalf, flyhalf, inside centre, wing as well as the No 15 jersey.

After 80 caps with the Brumbies in October 2016, Coleman signed a two-year deal with Western Force, joining head coach Dave Wessels who once coached him at the Brumbies.