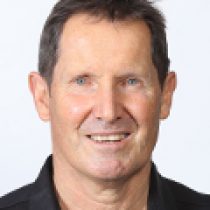 Deans is one of the most renowned coaches in the world with an impressive CV behind his name.

He began his career at with the New Zealand provincial side, Canterbury in 1997. Between 2001 and 2003 he was named as the All Blacks' assistant coach while, at the same time, taking charge of the Crusaders in Super Rugby- a position he held until 2008 when he was employed as the Wallabies' first foreign coach.

After his stint with the Wallabies, which concluded in 2013, Deans joined the Panasonic Wild Knights.