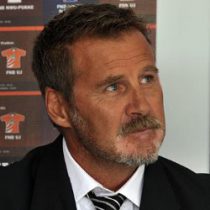 Du Preez is a former Springbok scrumhalf whose skills have seen him get nominated for South African Rugby Young Player of the Year in 1987, 1989 and 1990.

He played seven Test matches for the Springboks in 1992 and 1993 before seeking a coaching career, eventually landing with the Crusaders in 2010.

Following the Sharks' exit in the quarter-finals of the Super Rugby competition, Du Preez was handed the reins for the team's Currie Cup and Super Rugby campaigns for 2017.

du Preez took the Sharks to the Super Rugby Quarter-Finals in his first season in charge, where they were beaten 23-21 by eventual finalists the Lions.

He then led the Sharks to the Currie Cup Final where they were beaten by Western Province.

In November 2017 du Preez's son Dan made his test debut a year after his twin brother Jean-Luc. This was the first time in the history of South African rugby that two sons of a Springbok have played Test rugby.

Du Preez helped the Sharks win the 2018 Currie Cup and led the side to the Super Rugby playoffs in 2019 before the Sharks confirmed that du Preez would not coach the franchise during the 2020 Super Rugby season.

During his time at the Sharks du Preez won the Currie Cup with the and finished eighth in Super Rugby in 2017 and 2018, while just sneaking into the playoffs this season before losing out in the quarter-finals.