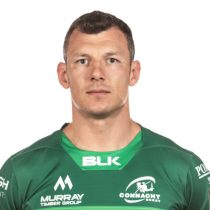 On the international front, Robin represented the Ireland Wolfhounds against England Saxons in January 2014 and later that year played in Emerging Ireland's Nations Cup winning campaign in Romania where he was awarded Player of the Tournament.

The Wexford native went on to make his senior debut against Georgia in the Guinness Series that November.

He signed a two-year contract extension in 2015/16 season that saw him remain with the province until at least June 2018.

Featuring in 27 of Munster's 28 competitive games, Copeland made the most appearances in 2015/16, scoring 3 tries.

At the start of the 2017-18 season, Copeland had played 47 times for Munster scoring nine tries.

In March 2018, Munster confirmed that Copeland would leave the province at the end of the season after 62 appearances, scoring 11 tries, since his debut against Treviso in September 2014.

Copeland signed with Connacht in 2018.