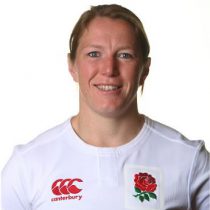 Since making her debut in 2003, Clark has gone on to win seven Six Nations titles and witness a number of changes to the women's game.

However, the highlight of her career came in 2014 when the Red Roses lifted the coveted Women's Rugby World Cup trophy.

Rochelle is the most experienced player in the England squad and 2017 marked her 14th consecutive calendar year at international level. She was appointed MBE for Services to Rugby in the 2015 New Year’s Honours List, has vast amounts of coaching behind her and is a true icon for her sport. Rocky has also started in all of the past 13 Six Nations matches.

In November 2016, she achieved the distinction of being England’s most capped rugby player when overtaking Jason Leonard’s total with her 115th cap in the 12-10 win over Ireland at University College, Dublin in November.

In July 2018, Clark retired from international rugby, 15 years after earning her first cap.

She retires as the world’s most capped women’s international, ahead of fellow Red Rose Tamara Taylor and former Scotland international Donna Kennedy, who both have 115 caps.