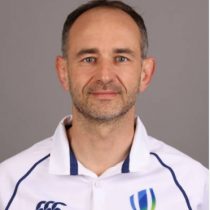 Poite officiated in his first Six Nations game in 2009. Before then, he served as an assistant referee in the 2007 World Cup.

In 2011 he was appointed to the 10-man elite referees panel for the World Cup in New Zealand.

In 2013 he was appointed to referee the third, deciding test between the British & Irish Lions and the All blacks.

Having garnered a reputation as one of the world's top officials, Poite was given the task of handling the 2019 World Cup final when when South Africa took on England in Japan.